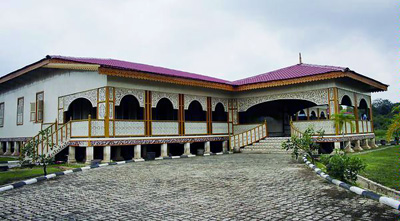 Riau Province belongs to Sumatra Island and consists of numerous regions. This way, Pelalawan District is not an exception. This famous region is the home of a significant historical site called Sayap Palace, which is the reminiscence of Pelalawan Kingdom. Most of the visitors come to palace to witness such historical structure with their own eyes. Some of them also come to the site to conduct photography and learn a bit history of Assyaidi Syarif Hasim – the King who built the palace.

The Nuance
In terms of appearance, Sayap Palace is definitely majestic. The roof has the color of red and the walls have a dominant color of yellow. There is a house located on both sides of the palace, as well. Those structures act as the wings (sayap) of the palace. No wonder, the name derives from the fact. When it comes to the concept of the structure, the palace applies “Panggung” design. It is the signature architecture design of houses in Sumatra Island, in fact. The structure is in a good condition, showing no signs of aging at all. It is because the local government has reconstructed it recently.

Exploring Sayap Palace
One of the reasons in visiting the palace is to learn its history. The founder of the palace was Sontol Said Ali, but he wasn’t able to finish the project due to his death. Later, Syarif Hasyim II continued the project and included extra structures on the both sides of the main building. The work was completed in 1896. Today, it becomes an option of tourist spots for those who are visiting Pelalawan District. In fact, it has been chosen as a primary destination especially among those who love history.

Visitors are allowed to explore the palace and take some pictures of it. No wonder, most of the tourists would like to conduct photography there. Some of them also take selca in front of the main building. Not only that, some other unique objects are seen in the location. For example, there is a historical mosque called Hibbah, which was built in 1936 during the reign of Marhum Budiman. Unfortunately, the original structure was burnt and replaced by the new one.

Another unique attraction is the presence of several old cannons, which are the reminiscences of the Dutch Colonialism. They become the proof that the Dutch was once visited the Pelalawan Kingdom back then. It is said more cannons can be found in Pelalawan, but most of them were flooded by Kampar River. Despite the fact, some remain in a good condition so tourists can take pictures in front of them. Overall, an adventure in Sayap Palace would give a distinct experience to visitors and give a better understanding of the history of Pelalawan Kingdom.

How to Get There
From Pekanbaru City, the best route to take when visiting Pelalawan District is Lintas Timur Street. The distance between those locations is 137 km so it might take about 3-4 hours to get there. Once they reach Pangkalan Kerinci (the capital of Pelalawan), the next destination is the palace. It can be done by riding a minibus, actually.