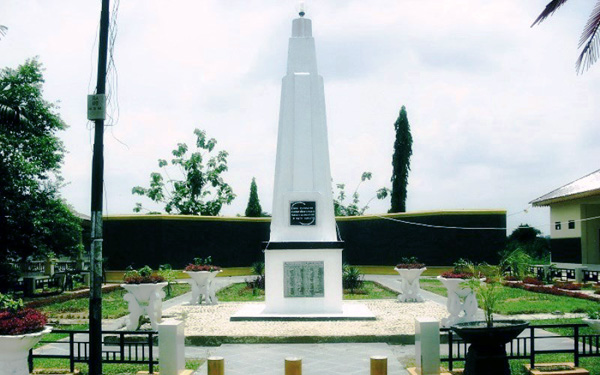 A historical monument resides in Rengat City, which is called Lima Januari Monument. Foreigners call it the monument of 5th January, actually. It was built to recall a tragedy of Rengat happened in 1949 – the second Dutch aggression. At the time, the invaders killed more than 2,500 people and threw the dead bodies into Indragiri River. One of the victims was the regent named Tulus, who is also the father of a local’s famous poet named Chairil Anwar. Today, people who live in Rengat would conduct an event in order to recall such gloomy history. For tourists, it gives them a chance to learn about the story as well.

The Nuance
In terms of size, the monument is not quite big. It has a moderate height as well. When it comes to the color, it has predominantly white color. Some trees surround the location, creating a comfy nuance to the area. Also, the monument is protected by a chain fence so that visitors cannot carelessly get near to it or blot the structure. Despite the regular size, the monument becomes a good object for photography. Thanks to the presence of plants and trees on the site. Lima Januari Monument looks more appealing.

Exploring Lima (5) Januari Monument
The common reason to visit the monument is to learn the history behind it. Both locals and outsiders are interested in it, after all. They can get the information either from a local tour guide or tour agency. These professionals may tell them about the cruelty of the Dutch in killing the civilians back then. It is even said those invaders killed people regardless of the gender and age. At the first time, they gathered the people to Indragiri River and shot them mercilessly. No wonder, the water turned into the red due to the bloodshed.

The best time to visit the monument is during the local event done by the local government. It is the visualization of that sad history and it is done annually every the fifth day of January. The locals gather near to the monument, wearing war attributes like weapons and war vehicles. This event looks like a parade that tourists would be interested in. During the performance, visitors are allowed to take pictures or even take part of it. The only requirement is the exact schedule of the event.

Another interesting thing to do in Lima Januari Monument is relaxation. The nuance is calm and relaxing, after all. This explains why the spot is suitable for lessening and hanging out with families. In order to get the best atmosphere, tourists must come either in the morning or afternoon, though. Getting to the monument at noon is a bad idea as the temperature is hot and uncomfortable.

How to Get There
The distance between Pekanbaru City (the capital of Riau) and Rengat City is 199.5 km. It takes a few hours to get to the monument, indeed. Despite the long trip, tourists can enjoy it by dropping by in a restaurant or a rest area before continuing the trip. It’s quite rewarding.